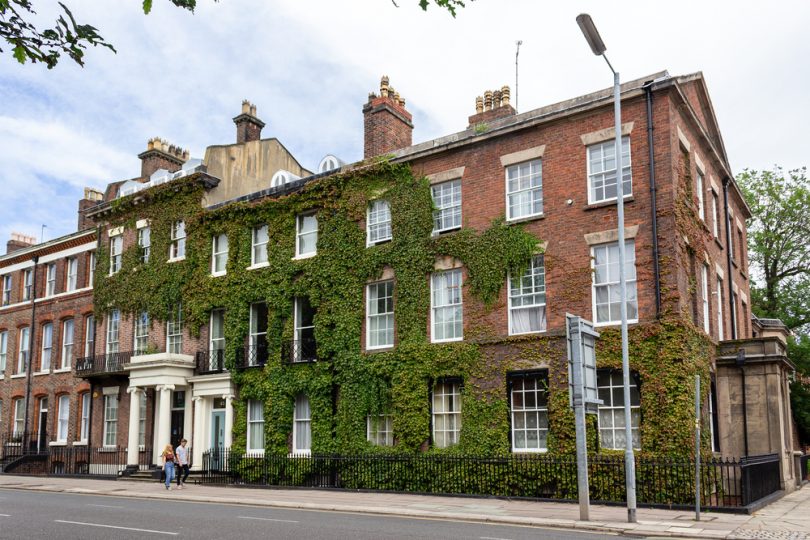 The Georgian Quarter is the place to discover history, celebrate the arts and indulge in exquisite cuisine.

Not many areas can boast having two famous cathedrals, a street named ‘the best in the country’ and a dining experience that’s difficult to match, all only a couple of minutes’ walk away from Liverpool city centre. Liverpool’s Georgian quarter is home to Hope Street, which won ‘The Great Street Award’ in 2013. This can be attributed to its celebration of independent restaurants and bars, stunning gated gardens and array of beautiful terraced 18th and 19th century houses.

The Georgian Quarter’s history dates back to the 1800’s, with buildings constructed for the extremely wealthy of Liverpool, which has grown to become an extremely sought after area within the city. The Quarter is well worth a visit to experience its tranquil infrastructure and to explore diverse restaurants the area has to offer.

The Metropolitan, (locally known as Paddy’s Wigwam) and the Anglican Cathedral stand watch over the Georgian quarter and can be admired by the rest of the city as they stand tall at either end of Hope Street. The Anglican Cathedral is proudly recognised as Britain’s largest cathedral, which comprises of breath-taking gothic arches and city wide panoramic views.

The Metropolitan offers an alternative, contrasting architecture with grand steps leading off Hope Street to explore its magnificent interiors. It’s four bells ring loud for the city to hear, better nicknamed by locals as ‘John, Paul, George and Ringo’, a touching tribute to Liverpool’s most loved band, The Beatles. The Metropolitan however, is perhaps less loved by the students of the city, who take the winding staircase down into the depth of the cathedral to take their yearly exams.

Both can be accessed for free daily, so you can save your money for the astounding food and drink the Quarter has to offer.

Entertainment You Can Enjoy In The Georgian Quarter

Not only does the Georgian Quarter offer charming surroundings, but it comes jam-packed with arts and entertainment thanks to the Everyman Theatre, Philharmonic Hall and haunting ghost walk.

The Everyman Theatre is situated within metres of the Metropolitan Cathedral and has been showcasing spectacular performances since 1964, hosting stars such as Julie Walters and Matthew Kelly. After undergoing an extensive rebuild, the theatre reopened in 2014, to turn it into the dazzling and inspiring theatre that exists today. The building encompasses the old and the new, with the original bricks used to build the wall separating the auditorium and the foyer. Ticket prices start from as low as £10, as the Everyman theatre really does aim to cater for everyone.

Based within the centre of the Georgian Quarter, Liverpool’s Philharmonic Hall is home to the Royal Liverpool Philharmonic Orchestra, the UK’s oldest professional award-winning symphony orchestra. The hall dates back to 1790 and hosts over 400 events per year, including contemporary and classical music events, recitals and film screenings. Within a city with a wealth of musical heritage, the venue supports a vast variety of musical genres to cater for the diversity of musical needs within the city.

If you want a peek at some of the city’s most famous footballers, Everton’s prestigious end of season award ceremony, ‘The Dixies’, takes place at the Philharmonic Hall. For the fans who don’t manage to get themselves a ticket, the venue offers the opportunity to get up close and personal outside the venue as the players parade and pose for photos prior to the event.

Even If You’ve Never Been, You Will Have Seen The Georgian Quarter

Even if you have not yet visited the Georgian Quarter, its picturesque streets have probably made an appearance on your screen at some time. Its beauty and unique features makes Liverpool one of the most filmed cities within the UK, with the Georgian Quarter largely contributing to this, due to its ability to replicate the period London streets. You’ll be surprised to hear as you wonder through the Georgian Quarter, you are walking the same streets that the cast of Peaky Blinders and Foyle’s War once did. After all, in Liverpool, “You’ll Never Walk Alone”.

The Georgian Quarter continues to grow in popularity for film sets, as its stunning architecture makes for a spectacular duplicate of cosmopolitan cities, such as London. It is one of the most picturesque and ‘instagrammable’ locations within the city, combining beautiful historic architecture with a modern twist.

Breakfast and Brunch In The Georgian Quarter

A direct walk from end of the Georgian Quarter to the other, should typically take no more than 10 minutes, however with all the tempting treats on offer, anticipate this walk to take a little longer! With such a wide variety of dining options on offer, you will be spoiled for choice, therefore here are my (and many others’) top picks!

For those who love to people watch and sip delicious coffee, you will be perfectly placed in 92 Degrees, situated directly opposite the Philharmonic Hall. The space is bright and airy, complimented by large ‘perfect people-watching’ glass windows. 92 Degrees was born and bred in Liverpool, having opened 4 spaces throughout Liverpool since 2015. Hope Street was 92 Degrees’ first born and promises to provide such a delicious coffee taste which will always leave you craving more.

A visit to Moose Coffee is a must while in the Georgian Quarter. With over 50 breakfast and brunch options on offer, all I can say to your stomach is…good luck! Moose were inspired by the American breakfast culture and the deli’s and diners of New York City, so tuck into an American pancake stack, with a drizzling or drowning of Canadian maple syrup and enjoy!

The Quarter, an Italian inspired deli, is situated on the cobbles of Falkner Street, serving breakfast, brunch, lunch and dinner. However, it is a must visit for breakfast and brunch, especially during the summer months due to its perfectly positioned terrace, in prime position to soak up the sun. Brunch is served 12-3 on the weekend, so even after a few too many cocktails, ‘The Quarter Breakfast’ is always there to sort out any sore head. This is the perfect location to enjoy the company of friends and family and take in the exquisite cathedral views and the beautiful quaint streets of the Georgian Quarter.

Wine and Dine In The Georgian Quarter

Many hidden gems lie within the Georgian Quarter, which range from fine dining restaurants to one of a kind traditional pubs, which offer an intriguing history, with must see toilets, bizarre, I know!

The Philharmonic Dining Rooms are situated across from the Philharmonic Hall, offering a perfect drink and dining option, pre and post-performance. However, the pub’s fame does not stem from its culinary offerings, but its unique history and Victorian décor. The pub has matched Buckingham Palace, with its Grade I listed status, the first purpose-built Victoria pub in England to do so.

The pub owns the most talked about toilets in Liverpool, however don’t just take my word for it, in Bill Brysons’ 1995 book ‘Notes From A Small Island’, he quotes: “There is no place in the world finer for a pee than the ornate gents’ room of the Philharmonic”. Unfortunately for the ladies, a trip to the toilets is slightly less exciting, as the pub began as a men’s only establishment, meaning they didn’t benefit from the Victorian design as they were built years later. However, the remainder of the Victorian décor is well worth a visit.

The Philharmonic Dining Rooms have even had famous footsteps pass through their doors, as Paul McCartney stunned fans with a surprise gig in 2018. Paul played to an intimate crowd of just 50 people. You never know who will walk through the doors of a pub with such an intriguing history and vibrant atmosphere.

Whether you visit for its toilets, history or food, the Dining Rooms are a must visit in the Georgian Quarter to discover a traditional, unique pub with an abundance of character.

For those looking to indulge in a bit of luxury, The Art School, located on Sugnall Street, is the place to be. The restaurant opened in 2014 and has become the only restaurant in Liverpool named among the SquareMeal top 100 restaurant list in the UK. Paul Askew, the Chef Patron of The Art School has a wealth of 4 decades of experience within the restaurant industry and has been instrumental in driving Liverpool’s flourishing dining scene.

A visit to The Art School will provide a special, memorable fine-dining experience to excite your taste buds and give you something to raise a glass to!

Whenever you decide to visit the Georgian Quarter, be sure to admire the architecture, enjoy the entertainment and dine in style.