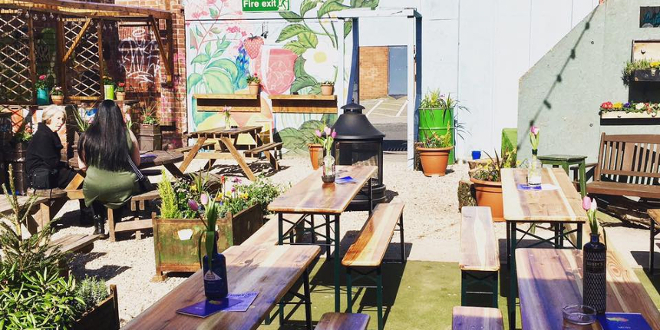 The Baltic triangle is fast becoming one of Liverpool’s trendiest places to live, work and play. After being voted the fourth hippest area to live in the UK, placing above neighbouring city Manchester’s well-known cool Northern Quarter, the up and coming neighbourhood is thriving with independent bars, restaurants and cafes that are doing the city proud.

Nestled between the city centre, the docks and Toxteth, the trendy area is surprisingly close to the city centre. The Baltic Triangle is exciting, diverse and is a fierce competitor for the best district to visit in Liverpool.

A Key Fixture in Liverpool’s History

The Baltic Triangle has a firm place in Liverpool’s history as an area close to the docks, with a colourful back story that cements its place as an important part of the city.

There’s some debate about how the area got its name but the truth is there are a number of reasons Baltic Triangle is named so.

During the height of Liverpool’s busy dock trade, Wapping Dock, the closest dock to the area, was the main port for sailors from the Baltic Fleet. With seamen coming from the Scandinavian area, the Baltic sailors were so large in number that a Scandinavian Church was built to accommodate them while they stayed in the city after disembarking. Gustaf Adolf’s Kyrka still stands today, the Neo-Gothic brick building is now home to Liverpool International Nordic Community Cultural and Social Centre.

There’s also the case of lapskaus, a Norwegian stew of meat and potatoes, believed to have been adopted by the people of Liverpool and provided the inspiration for our local and iconic dish of scouse.

Liverpool has played host to its fair share of famous ships, and in the early 1900s, the RMS Baltic sailed from Wapping Dock. RMS Baltic was the biggest ship in the world from 1903 to 1905 and even sent an ice warning to The Titanic on the day that she sank.

Baltic Triangle’s streets are littered with references to Liverpool’s darker history of its involvement with the trans-Atlantic slave trade. New Bird Street is named after slave trader Alderman Joseph Bird and Blundell Street after slaver Bryan Blundell, who also founded the Bluecoat School which marked their 300th birthday this year.

The warehouses that make up the majority of the buildings in Baltic Triangle are remnants of Liverpool’s maritime history, the regenerated warehouses are now home to creative and tech businesses and quirky bars and restaurants.

A truly unique restaurant that is just a short walk from Albert dock and The Echo Arena, Blundell Street Restaurant offers a huge restaurant set in a beautifully converted warehouse with bare brick walls and an industrial but cosy feel throughout.

Serving incredible international dishes and with an extensive bar, Blundell Street gets the mix of live entertainment, great food and friendly service just right. Labelling themselves as Liverpool’s premier cabaret restaurant, the restaurant plays hosts to some of the UK’s best tribute acts and even offer a club space for when your evening out turns into a late night.

You’ll have to leave your Thursday nights free if you want to try Liverpool’s best vegan Caribbean food. Italfresh started life as a pop-up food truck in the Baltic Triangle before taking up their winter residency at the multi-purpose venue, District, offering food inspired by Rastafarian principles.

Ital (pronounced “eye-tal”) is a way of cooking minimally processed food and uses no animal products. The geniuses behind ItalFresh have used this principle to put a trendy twist on traditional Caribbean dishes and the result is good food with none of the guilt.

The Baltic social has cemented itself as a firm favourite in Liverpool’s creative quarter, the quirky and cosy restaurant is now famed for its Punk Rock Afternoon Tea – a unique twist on the British classic that gives a mouth-watering selection of sliders, chicken wings, popcorn and teapot cocktails.

The mismatch of furniture and the shabby chic décor helps to make The Baltic social the ultimate trendy destination for the cool kids of Liverpool.

A truly classic pub that encompasses all things traditional about the soul of the Baltic Triangle, The Baltic Fleet Pub is steeped in over 200 years of history, with rumours of resident ghosts and two secret tunnels from the cellar, one to the docks and the other to the old red light district in Cornhill.

Try one of their ever-changing guest ales and sample a home brew their very own microbrewery. The Baltic Fleet Pub symbolises everything that is amazing about Liverpool, from the maritime history to the proper scouse that is served every day, throughout the day.

The Botanical Garden is a must visit for all the gin lovers in Liverpool, the city centre oasis is an outdoor venue that is open throughout the spring and summer months.

Perfect for soaking up the sun with a garden party vibe and signature gin cocktails, The Botanical Garden hosts regular live music and film nights too. Definitely, a venue that cannot be missed before it closes when autumn comes.

Another venue that makes the most of the Baltic Triangle’s iconic warehouses, Camp and Furnace host some of the best nights in the city including the famed party bingo Bongo’s Bingo.

The venue has such a diverse range of weekly events, from Friday night Food Slam, Meatmarket, a disco/dining carve-up and Saturday night parties with a sophisticated feel. Definitely don’t miss out on experiencing the Baltic Triangle’s best space for drinks, music, events and parties.

The craft beer revolution has spawned an exciting generation of new beers that are brewed with inspiration and love and Black Lodge Brewery is a prime example of the effort that is put into these craft brews.

The venue is primarily a brewery, experimenting with flavours to get unique and small batch beers, head to their tap room to try some of the ever changing and evolving tasty beverages.

A diverse converted warehouse and recycling yard, Constellations isn’t only a thriving and trendy garden bar in the heart of the Baltic Triangle, it also offers event and music performance space in The Observatory.

Chill out in the stylishly designed garden bar with a glass of wine before heading into the warehouse for a night of endless possibilities.

Siren, located right on the cusp of the Baltic Triangle, was set up by two lifelong friends to bring Liverpool a relaxed eatery with lovingly home-made food and quality coffee.

The ladies who created Siren were adamant in keeping their ingredients locally sourced so revel in their Baltic Bakehouse Bread, The Little Pig meat and Chocolate Cellar chocolate. All local, independent business who work together to give you Siren’s to die for classic dishes.

Sugar and Dice is a truly unique café concept that fits right in amongst the cool bars and creative businesses, offering the chance to play one of their hundreds of board games while you sip on freshly brewed tea and coffee.

With a solid reputation for friendly staff and community involvement, Sugar and Dice is a lovely way to while away the afternoon. Local designers also bring their prototype games to the café for testing, so you can even have a sneak peek at the best upcoming board games!

Baltic Bakehouse is now well known across Liverpool for its artisanal baked creations, nestled amongst the warehouses, the bakery has a high demand from eateries across the city so get there early to try their award-winning food.

It’s not just bread that the café serves, their fresh salads, experimental sweets and light pastries are all available to stay in or take away.

If you look up the hill from the Baltic Triangle, through the warehouses and quirky buildings and independent business, the Anglican Cathedral stands in the distance. The beautifully imposing cathedral is one of the most well-known icons of Liverpool’s skyline and is a sight that has to be seen to be believed.

If you can tear yourself away from the Baltic Triangle’s plethora of bars, cafes, bakeries, restaurants and attractions, take the short walk up Parliament Street to see the cathedral in all its glory.

Head to Wapping Dock to get away from the crowds at Albert Dock, equally as beautiful with a serene atmosphere, Wapping Dock is just as much an icon of Liverpool as its more well-known sisters.

Wapping Dock was built nearly 200 years ago and has the same red brick warehouse style as the warehouses that run up and down the waterfront. The Grade II listed building was badly damaged in the May Blitz of 1941 but stands today as stunning as ever.

Want something a little bit more unusual for your trip to the Baltic Triangle? Look no further than the newest addition to the coolest place in Liverpool, Ghetto Golf.

The adults only crazy golf course is based in the former Cains Brewery and boasts a junkyard vibe with on-site cocktail bar and delicious hot dogs.

Marvel at the luminescent graffiti that adorns the walls before taking to the ghetto course for 18 holes of golf madness.

Baltic Triangle is undeniably the coolest place to be in Liverpool at the moment, with so many incredible independent businesses popping up all the time, you never know what you’ll find when you take a walk around the streets.

Like reading about Liverpool’s growing network of unique businesses? We rounded up the best across the city, so whether you’re in the Cavern Quarter, Ropewalks or at the Waterfront, you can always find the best of Liverpool.