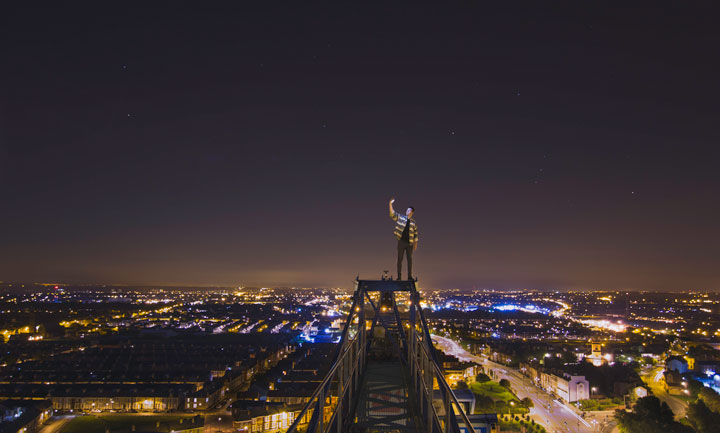 Photography has the power to transport an audience into a different place and time. It allows a person to see a destination or object in a different light, angle or from a unique perspective. It is, undeniably, a gift to those skilled, creative and brave enough to take on the challenge.
Few people are willing to stand on the edge of a building for a great shot – or come up against the police in the search of one amazing photograph. However, 21-year-old R. Stowell Smith, who hails from the Wirral, Merseyside, is one of those people. He isn’t afraid to stand on the roof of the Liverpool Anglican Cathedral or to take a photo on the highest point of a crane. Some may view his methods as criminal or dangerous, yet we view Robert as someone who is not afraid to go to great lengths to provide his audience with a great shot.
We recently caught up with the urban explorer to find out more about the man behind the camera. 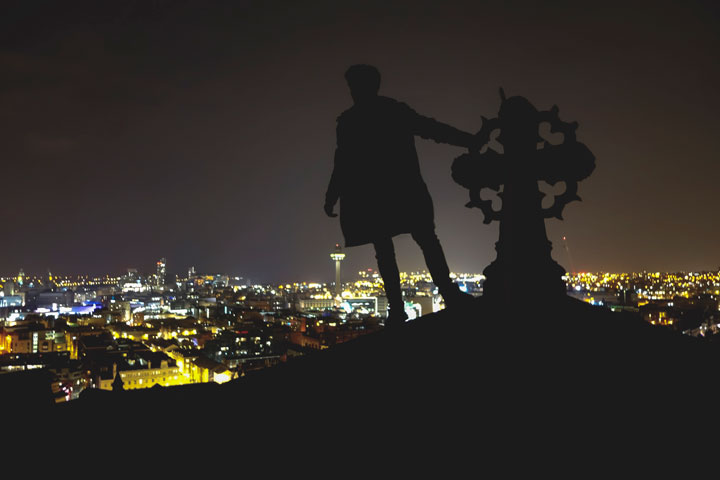 Can you tell us how it all began?
As many young kids do, I would always be climbing trees, climbing over and on stuff. But in 2012, I was invited by a friend to come take some photos of his friends. It was then that I was first introduced to Parkour. From the get-go I was interested in the movement and started to try it myself. Since then, myself and a group of friends have taken our understanding of the movement and used it to help get to some unusual vantage points of whatever place or city we are in. 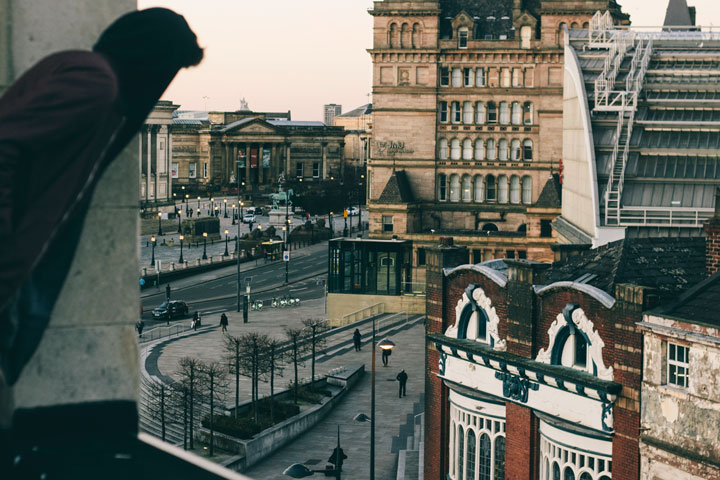 You obviously take a fair few risks, Robert. Have you ever ran into any trouble along the way?
One downside of it all is we do sometimes have run-ins with the police. When we are climbing or on a rooftop, we do try out utmost to leave no trace of us being there, but sometimes we are spotted by members of the public who will ring the police, etc. On the rare occasion we do come into contact with the police, my group are polite and honest about what we’re doing. Sometimes police officers are interested as to why we do it, and we’re able to have a discussion with them about it all. I’d like to think they hopefully leave not thinking we’re a bunch of no-gooders who are just up to no good.

Up & Over Any Obstacles, in search of a shot. #Wallasey #Liverpool #Wirral

How has the public responded to you?
In the past, when we have been in the public eye, we more often than not are the target of angry views or opinions. While they are entitled to an opinion, I find it unrealistic for this activity/movement to be labelled criminal and pointless as a whole.
Like any sport, with football being a prime example, there are always going to be a group of people that give the activity a bad name. Some people aren’t so careful about leaving no trace at all etc.; all I can say is I don’t connect myself to these people. Another obvious opinion is that it’s dangerous, not only to ourselves but the members of the public below. My answer to this is: none of the people know me.
The reason they associate danger with death is because they have a fear in their lives. While I fully understand climbing and jumping from rooftops isn’t everyone’s cup of tea, when I am doing such activities I’m not aimlessly throwing myself around. I know my body, its capabilities and the danger it entails. But I also enjoy the adventure, as well as the interactions it can bring. 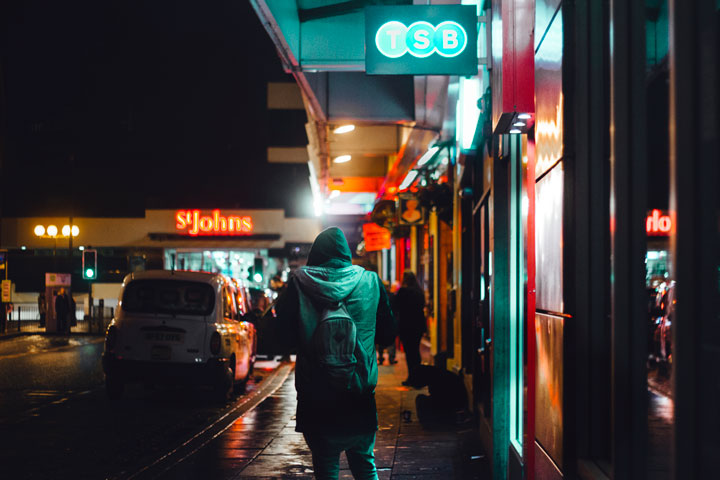 Have you ever been banned from any buildings in Liverpool?
Until earlier this year, I hadn’t been. But I am now the owner of a lifetime ban from all St John’s premises. This happened when we knowingly got seen for the sake of a photo. 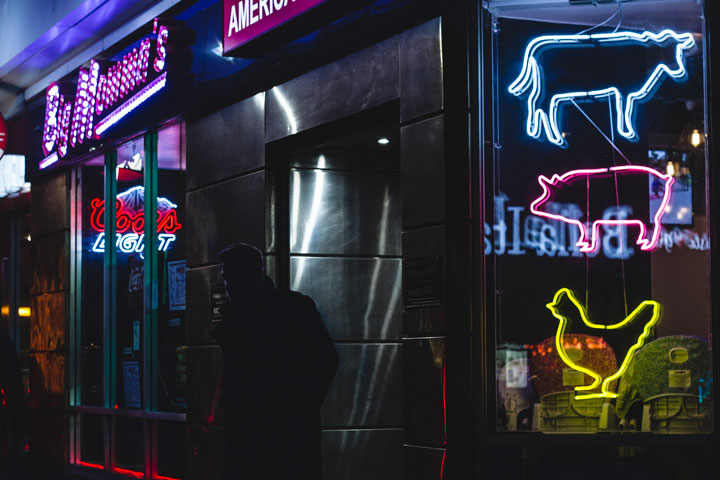 You regularly publish your photos on Instagram. What responses have you received online about your photography?
My photos online receive positive feedback. While it is rare that we get to see/hear a positive response in person, it was only a couple of days ago that we happened to get into a conversation with a bunch of students in Liverpool, after they noticed us walking around on the rooftop of their student apartments.
Do you ever feel frightened when you’re up so high? You seem almost fearless.
When I am standing on a corner of a rooftop, it’s not necessarily fear that’s going through my mind, but an appreciation for being in that moment. The moment of being able to choose life or death. In that moment, you’re free from daily worries, such as bills, work etc. You are just living in that single instance, while at the same time getting an amazing view and one heck of a story to share with future grandkids. Ha! 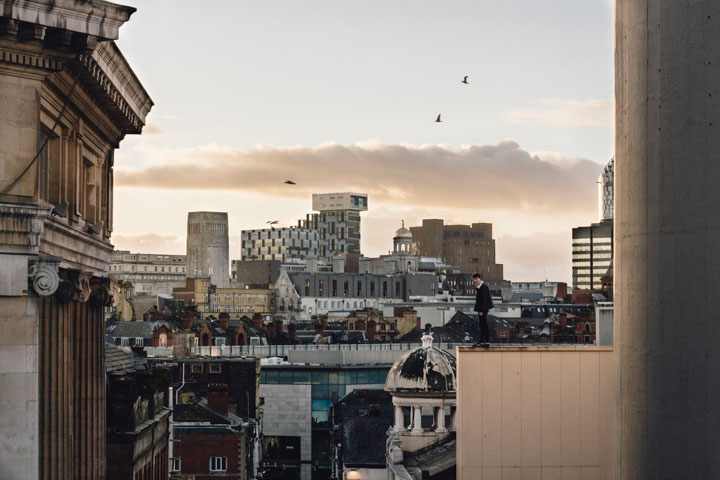 Many of your photographs are taken in Liverpool city centre? Is there a reason why you choose to shoot here? What do you love most about the city?
The reason I shoot in Liverpool so much is because it is pretty much my hometown. I can hop on a train and be sat on a roof by the sunset. Also, Liverpool is full of interesting characters just waiting to be photographed.
Do you take inspiration from any photographers?
Because I post my photos to Instagram, I occasionally come across photos/photographers that take my interest, such as ‘Ta-Ku’ and ‘Next Subject’, both of which focus on street photography, which I’ve been experimenting with as of late but, at the same time, I take inspiration from photos posted by friends. 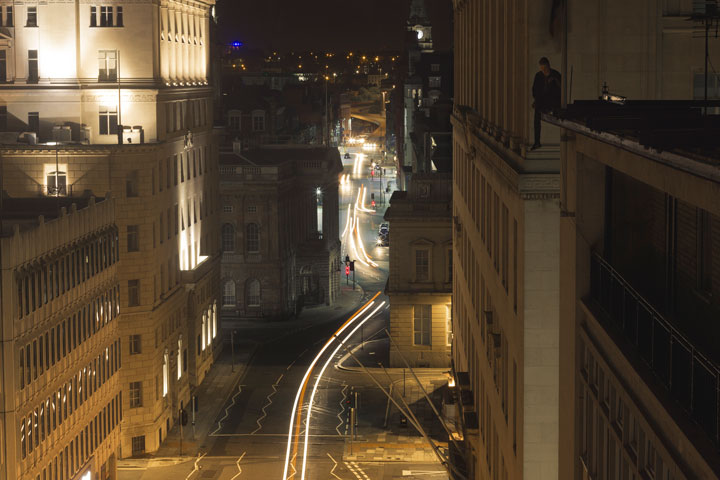 How does your family feel about your photography? Do they worry you’re risk-taking or are they 100% supportive?
My family, as a whole, are fine with it. They often find out a few days after climbing, when I send them over the pictures. I’ve had talks with my mum, and she’s happy that I’m not drinking or doing drugs, and, most importantly, that I’m happy and enjoying my life.
You mentioned earlier you’re part of a group. How many people are part of it? Do you pass on your photography skills or knowledge?
The people I tend to do climbs with is ¾. We like to keep the numbers small to prevent the risk of being seen. We tend to just do our own thing, but often look to each other for opinions and idea sharing.

What advice would you give to someone who wants to follow in your footsteps?
If a person is interested in getting into this, I would first suggest getting themselves into some parkour lessons, which can now be done at such places as Airborn Academy, which many friends of mine teach at. Once you’re confident, find a group of like-minded people and start small at first. 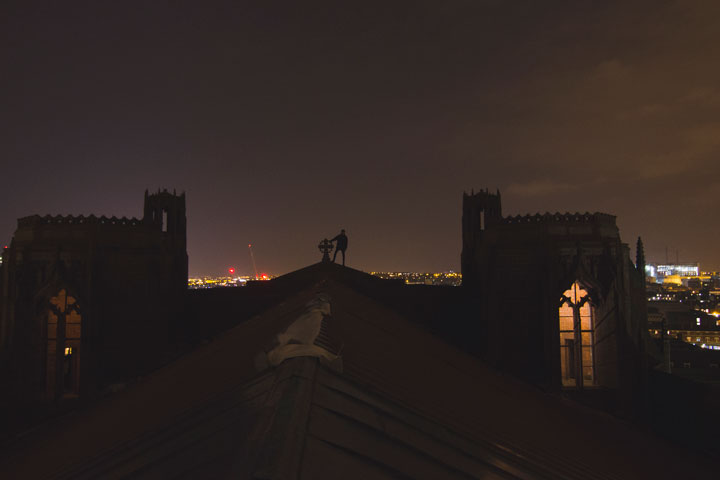 Liverpool is filled with so many beautiful buildings and views; do you have a favourite landmark to photograph?
My favourite spots to photograph in Liverpool are some of the main landmarks the city proudly offers. I have a great respect for these buildings, such as the Anglican Cathedral, which I climbed earlier in the year. 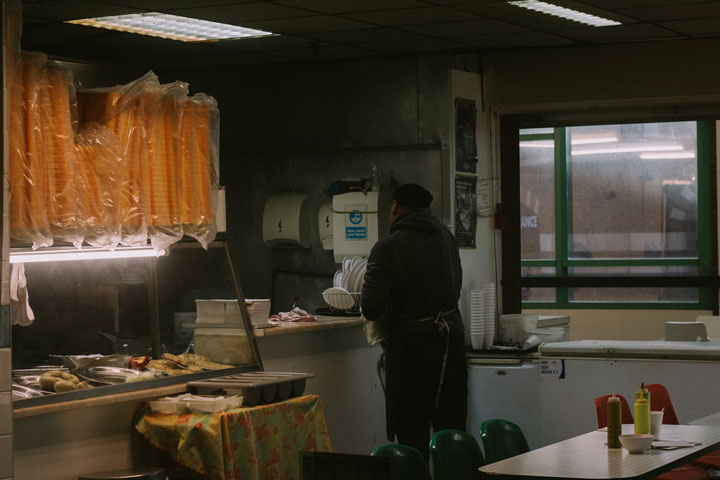 Is there a Liverpool landmark you haven’t explored yet that you’d love to in the future?
I’m still yet to climb/be on top of one of the most iconic buildings in Liverpool: the Liver Building! So, who knows when I’ll get the chance to do that.
Finally, what can we expect from you in the future?
You can expect bigger, more creative and interesting photos!

Whether you love or like R. Stowell Smith’s methods, you cannot deny he is a very talented photographer who has a deep passion for the city’s architecture and people. When faced with authority, security or the public, he is both respectful and honest – and we cannot wait to see what the future has in store for both him and his photography.